Panty & Stocking with Garterbelt Wiki
Register
Don't have an account?
Sign In
Advertisement
in: Male, Main Characters, Characters,
and 3 more

Chuck (チャック, Chakku), also known as Piggy, is the overall tritagonist of Panty & Stocking with Garterbelt. He is Panty and Stocking's pet sidekick. He resembles a green dog with zippers for ears and a tail.

Chuck is subjected to various injuries throughout the series, but is able to recover extremely quickly. Panty and Stocking in particular regularly 'kill' him without even breaking the pace of their current situation, and often take out their frustration on him with the knowledge that nothing will really affect him.

Aside from being a convenient punching bag, he is also often used as a sort of mail box by Heaven, getting struck by lightning and spitting out a clue to a ghost's whereabouts. In addition, he has been shown to be capable of driving the Anarchy sisters' car, a roofless pink Hummer H1 called See Through (シースルー, Shī Surū).

He is endowed with a more formidable power as well: by turning himself inside-out with his zippers, Chuck has the ability to transform into a colossal horned hellhound. In this form he can still regenerate from infinite amounts of abuse and fire giant fireblasts powerful enough to take out the powered-up form of his counterpart Fastener. He can also transform himself into a giant zipper that can seal Hell's Gate.

Despite those abilities, Chuck usually behaves like a very stupid dog. He is only able to say his own name (and sometimes the word 'fuck'). He seems to be very sex-obsessed, as he is often shown touching himself and humping random people.

Oddly enough, it has been shown his head is inhabited by a small red devil in a black suit who can exit through the zippers on Chuck's head, it is possible this devil controls Chuck's brain.

Chuck in "HELP! We are Angels".

Chuck and Fastener in "Chuck to the Future".

A Hellhound Chuck firing a green blast out of his mouth. 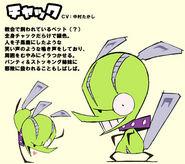