Panty & Stocking with Garterbelt Wiki
Register
Don't have an account?
Sign In
Advertisement
in: Male, Antagonists, Characters,
and 2 more

Fastener (ファスナー, Fasunā) is a side character in Panty & Stocking with Garterbelt. He is the pet sidekick of the demon sisters, Scanty and Kneesocks, as well as the evil counterpart of Chuck.

Fastener is a pink-colored, plushie-like being, with light green eyes. He has a zipper going down his rather angular-shaped head and another one around his neck, much like a collar, and has pointy, short black limbs (which he can use as tiny scythes to chop up Chuck) and resembles that of a praying mantis.

Like Chuck, he is still subject to casual attack and various injuries, though his healing from them seems to be a bit slower. Also similarly to Chuck, he can only say his name, and also is an excellent driver, being often seen behind the wheel of the demon sisters' transport, G-String. Fastener can also transform into a powerful ghost-like form by zipping himself inside-out, appearing as a two-headed wyvern (or more specifically, a one-headed wyvern whose head and neck has been split in twain vertically). In this form, he uses his formidable claws to attack.

As opposed to Chuck, Fastener seems less distracted in his work, more focused and intelligent, although this doesn't necessarily give him victory over Chuck when the latter actually goes head-to-head with him. Fastener has a history of rivalry with Chuck, dating back to their college days. There is a small red female devil in a black suit living inside Fastener's head, who is romantically interested in the devil inside Chuck's head.

Fastener in "Chuck to the Future".

Fastener in "Chuck to the Future". 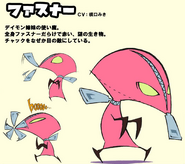