Panty & Stocking with Garterbelt Wiki
Register
Don't have an account?
Sign In
Advertisement
in: Male, Main Characters, Human,
and 5 more

Garterbelt (ガーターベルト, Gātāberuto) or "Garter" for short, is the titular deuteragonist of Panty & Stocking with Garterbelt. He is a large black man with a titanic afro. Garterbelt is the reverend of Daten City and the mentor of the Anarchy sisters, Panty and Stocking.

Garterbelt is constantly annoyed and bewildered by Panty and Stocking's erratic behavior and lack of commitment to the task at hand. He is the one who gives the Anarchy sisters most of their missions, which are sent to him through Chuck, in the form of small notes.

Garterbelt is shown to be attracted to men, with a particular interest in young males, much to the chagrin of Brief, who is a constant target for his sexual advances. Although he is rather vocal about keeping order in Daten City, he has a masked alias known as "Master G" (aka M.G.), which he uses to disguise his identity while pursuing more risky hobbies. Despite being clear to the audience, everyone in the show seems to be oblivious to Master G's true identity (this is most likely a homage to intentionally bad disguises in western animation).

Garterbelt has a very checkered past. In "Once Upon a Time in Garterbelt", it is revealed that Garterbelt used to be a gangster, who performed various imaginable crimes. He eventually became the greatest crime lord in his town, but was gunned down in his own office. Much of this is performed in a parody of the 1980's classic movie "Scarface."

Soon after, he ended up in heaven, where he was given an as-of-yet undisclosed mission by Judgement. When he refused to take it, he was cursed with immortality and sent to the beginning of time, forced to live through the creation of the world as it is today, going through biblical events such as Adam and Eve (in which he ate the apple), Noah's ark, etc. And other events Including various wars, being part of many different cultures, and more. Eventually, Garterbelt finally realized that his own suffering would lead to true happiness. He retains his immortality in order to continue supervising Panty and Stocking, exploding in a manner similar to ghosts whenever he is killed, only to reassemble himself moments later.

Garterbelt is known to be immortal. Every time he is killed, he explodes the same way as ghosts do, but his body reassembles a few moments later. It is unknown if he will die the moment Panty and Stocking's mission on Earth finally concludes.

Garterbelt does not seem to be affected by wounds that would normally kill a human, as shown in "Bitch Girls: 2 Bitch", in which he was mortally stabbed by Corset, and even after the latter took Garterbelt's heart completely out, he didn't die. At least, not until Corset (literally) crushed his heart.

He can also pull infinite ammo from his afro, and use guns and rifles with precise ease.

Garterbelt is also known as "Master G", in which the 'G' stands for Garterbelt. As Master G, he hosted the lingerie run in "High School Nudical", and in "If the Angels Wore Swimsuits", he was seen setting a betting table on who would win the beach volleyball tournament, angels or demons.

Garterbelt kept a Heaven's Express Black Card in his afro, which supposedly gives you an unlimited number of Heaven Coins.

As stated above, Garterbelt is known to be attracted to men. Mostly foreshadowed after a comment Brief made, saying Garterbelt was a really interesting guy, which Garterbelt replied to saying "I'm single! I really am single". He offered to take Brief home after having dinner together. He is later seen walking into an area full of men hugging each other, with clubs named Rainbow, Bear Club, and Club GBoys in the background. Also, in the beginning of episode 3 when the scene flashes to his torturous two weeks without tissues, one scene shows him huddled in a corner with several magazines on the floor with men on them- one of the covers including the words "Play Guys" much like the famous Play girl magazines.

Also, during "High School Nudical", Garterbelt is seen ogling the boys' scantily clad bodies during the lingerie run party. Garterbelt was also very eager to see Brief strip naked in "Inner Brief". With that being said, before he was killed and turned immortal, he was seen surrounded by women, indicating he may be bisexual.

One of the biggest hints to Gaterbelt's sexuality is the short "Map of the Daten City" from the OVA, where there are multiple signs of Garterbelt taking interest in men. At the start, Garterbelt is seen kicking numeral naked men out of the church with no sign of Panty nor Stocking around. Slightly after, Garterbelt is seen in BDSM gear being whipped by several men. During the part about Daten Beach, yet again, naked men are coming out of the umbrella Garterbelt is under. Finally, while discussing West Hollywood, Garterbelt chooses which man he wants to see at GoGo Boy, which is garnished with rainbow flags.

Garterbelt in "Once Upon a Time in Garterbelt". 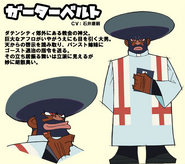 Garterbelt holding a torch while looking at the new form of Stocking.

Garterbelt with his gun aiming somewhere while Panty is watching the possible Devil form of Stocking.
Garterbelt's Image Gallery