Panty & Stocking with Garterbelt Wiki
Register
Don't have an account?
Sign In
Advertisement
in: Female, Demon, Antagonists,
and 6 more

Kneesocks Daemon (ニーソックス, Nīsokkusu) is a major antagonist in Panty & Stocking with Garterbelt. She is the younger of the demon sisters. Kneesocks is both Stocking's counterpart and rival.

Just like her sister, Scanty, she is obsessed with rules, claiming that rules will solve the chaos of freedom. Compared to Scanty, however, Kneesocks is calmer and more reserved in similar way how Stocking is more level-headed than Panty, but still tends to fly off the handle when the rules are being disparaged. Oddly enough, she blushes quite easily, causing her face to become a lighter shade of red.

Kneesocks is very intelligent, as she uses elaborate traps and trickery to fight against the Anarchy sisters. She has more control over her emotions and thinks things through better than her sister. However, she loves her sister very much, and often acts confident around her. Kneesocks dislikes Stocking as much as Scanty hates Panty.

She uses a large amount of English in her speech, even by the standards of the show. It was also implied that she and Scanty may have an incestuous relationship in "D.C. Confidential".

As Stocking's counterpart, her ability also allows her to transform her kneesocks into weapons. Kneesocks wears two white kneesocks, which can be transformed into a pair of scythes, called Double Gold Spandex (ダブル・ゴールド・スパンデックス, Daburu Gōrudo Supandekkusu). She can spin her scythes around her body in a similar way to how a helicopter's rotors work, or combine them into an axe or a large throwing blade.

She is implied to have the ability to bestow bad luck on others, as seen in "The Stripping", where she cancels out the Anarchy sisters' good luck streak at the roulette table. She may also have shapeshifting powers, as she is able to conceal her prominent horn while acting undercover in "Panty + Brief", as well as the ability to grow a devil tail.

Kneesocks physically is about 17 years old (though in reality she is about 1700 years old), which can be deduced from the fact that she is in the same age as Stocking, physically she is at least one year younger than Scanty, and she still can attend high school, in this case, most likely on second year. She has dark red skin, long blue hair tied in a ponytail, and a single horn on her upper forehead. She has small fangs, including one that appears visible even when her mouth is closed. Her eyes appear to have a double-layered iris, with a yellow outer ring and a green inner ring.

Kneesocks normally wears a uniform identical to that of her sister's; a short beige skirt, a matching beige suit, a dark red tie, a black and orange armband, and black pumps. She distinguishes herself from her sister by wearing angular glasses and a pair of white kneesocks (which actually go well over the knee). 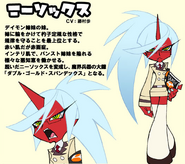 Kneesocks and her sister reacting to Stocking's new form

Kneesocks holding her weapon on the side of Scanty, Brief and Garterbelt.
Kneesocks' Image Gallery

Community content is available under CC-BY-SA unless otherwise noted.