Panty & Stocking with Garterbelt Wiki
Register
Don't have an account?
Sign In
Advertisement
in: Panty, Female, Angel,
and 5 more

Panty Anarchy[2] (アナーキー・パンティ Anākī Panti, transliterated as "Anarchy Panty") is the titular main protagonist of Panty & Stocking with Garterbelt. She is the oldest of the Anarchy sisters.[3] Her name is derived from the object she is able to weaponize.

Panty physically is about 18 years old (although in reality, she is about 1800 years old), which can be deduced from the fact that she is seen to have sex with adult men, and she can still attend high school, in this case, most likely on third year. She has pale skin and the typical ”Spiky Hair” hairstyle. Her hair is long and blonde and her eyes are blue.

Panty has fashionable clothing. Her panties in this form have a cyclamen color. She wears dark red heels with a belt on both, a dark red dress and dark red hoop earrings. She also wears a gold necklace and two gold bracelets on both of her wrists.

In many episodes, she wears different clothes, but this one is considered to be her main.

In angel form, Panty wears a Greek-like outfit. Her panties in this form are a fuchsia color. She wears heeled gladiator sandals based on Hermes' sandals, a loose white petticoat skirt with white ribbons and light red hearts on the sides and a white top with a light red heart on the front and with gold straps. Her accessories are a gold choker, two gold bracelets on both arms and wrists, and white one-finger gauntlets that reach her wrists.

Panty is obsessed with sex and has it as much as she can. She is often portrayed as a celebrity blonde and is always looking for different men to sleep with. Panty can also be spiteful at times (mainly at Brief, Garterbelt, and sometimes Stocking). She has low standards in men and is occasionally shown to be unsatisfied after the act. Unlike her younger sister Stocking, Panty doesn't take her job as a ghost-hunter seriously. Instead, she focuses on fulfilling her personal goal of having sex with one thousand men during her stay on Earth. Panty openly admits during one episode that Stocking is the more intelligent sister, and doesn't always appear to think her thoughts through before acting (such as showing a porno she made in a theater). Stocking is rather rude and provoked toward Panty due to her sexual behavior and craziness. Panty isn't very fond of sweets, just as Stocking is not interested in sex.

Panty is the personification of the deadly sin Lust in the series, which is emphasized by the number of times she has sex throughout the series, and by the X-ray of her brain during the opening sequence, which shows her only thoughts are about both men and sex. Panty is also quite shameless, not caring when some broadcasters were able to see (and record) her panty-less, and even going as far as pole dancing in front of an audience, while on a live show. She also didn't see the problem with everyone seeing a porno she was in; instead she just saw it as a regular movie.

Panty jogs to maintain her figure, and she is annoyed that Stocking doesn't have to exercise to be slender. Panty likes spicy food in general, and mentions disliking sugar (although she has been seen eating sweets throughout the series and she even ate Stocking's Jean-Paul Heaven pudding in Catfight Club). She also mentions that being hungry causes her to swear more often than usual. Her favorite snack is Death Babanero-flavored potato chips and she has shown a great fondness for living a celebrity lifestyle.

Whenever Panty hunts ghosts, she works in an incautious way. She often takes the more reckless route, using pure power to finish the job. However, this style of fighting has caused her to be wide open for attacks, including losing her panties in the heat of the moment and forcing her to improvise with either using normal weapons or other underwear.

Panty was kicked out of Heaven for her immoral behavior, most likely due to her lusty tendencies. In "The Turmoil of the Beehive", it was revealed that Panty went to a high school in Heaven, however, according to Stocking, she barely ever went to classes.

To prepare for her battle, Panty removes her panties. Her ability is being able to transform her own panties into a pistol named Backlace, a spiritual gun which can harm ghosts. Backlace is unable to harm humans; however, it has not yet been confirmed if all heavenly weapons follow this rule.

Backlace seems capable of harming demons, angels, and anything spirit related, such as ghosts. Backlace, when combined with Stocking's panties or any other underwear, can become 'upgraded' versions of her usual gun. So far, two examples of an expanded Backlace are an assault rifle and a sniper rifle.

In the absence of Backlace, Panty can fight using normal guns. However, she usually avoids this because she does not like the smell of gunpowder, and the fact that normal guns don't do much damage.

Panty is also able to transform other people's underwear in guns, but the weapon design is limited due to the wearer's genitals, becoming curved, short or even bent. However, some, like Brief's, prove to be even more capable than Panty's own.

As seen in the episode "Trans-homers", Panty and Stocking have both shown the ability to nullify any effects given to their physical appearance by transforming into their angel form; however, it has only been only proven to nullify the effects of them becoming robots.

Panty is also shown to have enhanced vision in the episode Bitch Girls, where she can see from the farm to Hell's Gate, where Brief is held captive by the demon sisters and Corset.

Throughout the series, Panty is shown hooking up with a variety of men for sexual intercourse, including: 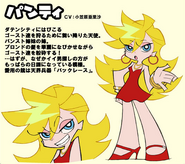 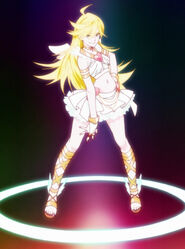 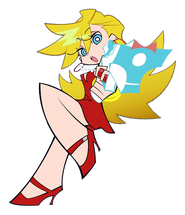 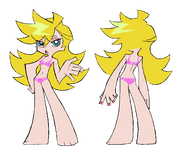 Panty in her panties prior to transforming them into a gun 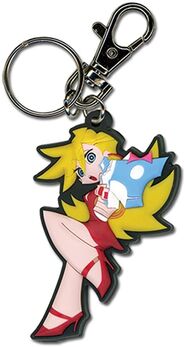