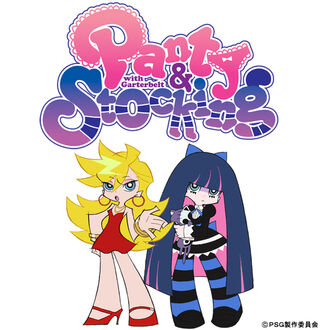 Panty & Stocking with Garterbelt (パンティ＆ストッキングwithガーターベルトPanti ando Sutokkingu wizu Gātāberuto) is a Japanese animated series by Gainax. It aired nationwide between October 1, 2006 and December 24, 2010 on BS NTV, and was also simulcast on Nico Nico Douga and Crunchyroll.

Following the broadcast of Imaishi's previous project, Gurren Lagann, the show's staff went on a trip for rest and relaxation. At that time, they aired their opinions to each other under drunken and humorous circumstances, saying such things as "Next time, I want to try this" in regards to approaches to animation. Almost all the concept for the anime was made during the initial trip; the name of the main characters, Panty and Stocking, was coined at the very first meeting.

The series' animation is done in a distinct style, resembling and homaging North American cartoons, much different to Gainax previous works. The series also has many sexual themes in every episode. The theme of the anime is 'vulgar with indecent jokes', with Imaishi saying, "If we are going to do this, we will try it thoroughly". Hiromi Wakabayashi, who provided the inital idea for the series, cited Drawn Together as an inspiration for the show's crudeness.

The Anarchy sisters, Panty and Stocking, are angels who were kicked out of Heaven due to bad behavior. They are sent to Daten City, a place located on the edge of Heaven and Hell, where creatures called ghosts have run wild by feeding on human desire. Under the watchful eye of Reverend Garterbelt, it's up to Panty and Stocking to destroy these Ghosts, in order to collect enough Heaven Coins to return to Heaven. Only the Anarchy sisters can save humanity from these monsters and when they're not bickering with each other, they're unstoppable.

These pictures were done by various artists working at/for Gainax, and were featured in Gainax' official website's front page.

FUNimation picked the show for English dubbing. The complete first season has been released on DVD and Blu-Ray.[1]