Panty & Stocking with Garterbelt Wiki
Register
Don't have an account?
Sign In
Advertisement
in: Female, Demon, Antagonists,
and 6 more

Scanty Daemon (スキャンティ, Sukyanti) is a major antagonist in Panty & Stocking with Garterbelt. She is a female, red-colored demon, with green spiky hair, yellow/green eyes and fangs. She was originally said to be the mayor's daughter; however, this was later revealed to be a cover-up for their activities. She is the older of the demon sisters. Scanty is Panty's counterpart and rival.

Scanty physically is about 18 years old (though in reality she is about 1800 years old), which can be deduced from the fact that she is in the same age as Panty, and she still can attend high school, in this case, most likely on the third year. She has pale green spiky hair that's usually long and red skin, as she is a demon. She has yellow (outer ring) and green-yellow (inner ring) eyes. She also has fangs.

Contains spoliers about episode "1 Angry Ghost" In episode "1 Angry Ghost", Scanty disguised herself as Tom Croose (voiced by Shinichiro Miki), the host of the live tv show called  Judgement Day, who invited the Anarchy sisters in order to accuse them for murdering a supposedly friendly ghost, Husband Petter.

Scanty is obsessed with rules, regulations, and conformity, as opposed to Panty and Stocking's more erratic and unruly behavior. She is, however, quite excitable, and becomes extremely frustrated when things don't go her way. Her excitability is shown during situations that often unintentionally leads to her and Kneesocks' downfall. This can be seen in "...Of the Dead", when she jumps for joy, unknowingly spilling the demonic zombie serum and in "If the Angels Wore Swimsuits" when she accidentally pushes the self-destruct button in her limo out of rage. She is also quite incestuous with her sister Kneesocks.

Scanty enjoys bringing pain and humiliation to others. She hates the Anarchy sisters, and she believes her mission is to destroy Panty first since she hates her more than Stocking. Along with her sister, Kneesocks, she comes up with various schemes to kill or at least humiliate both Panty and Stocking. While the Anarchy sisters were away doing missions, the two demon sisters became the new queens of Daten City High, and used their influence to enforce a series of strict rules on the student body, which created order in school.

As Panty's counterpart, her ability is also being able to transform her panties into revolvers. She wears two black thongs, which can be transformed into a pair of revolvers, called "Double Gold Lacytanga" (ダブル・ゴールド・レーシータンガ, Daburu Gōrudo Rēshītanga). The two revolvers can be combined to form a huge shotgun.

Judging from Panty's ability to transform different type of guns out of panties, it can be presumed that Scanty is also capable to do the same. She can also shape-shift to a limited extent, concealing her horns and smoothing her hair for her appearance as a bride in "Panty + Brief", as well as growing a devil tail. When Brief's rejection of her caused her to lose her temper, her horns reappeared and her hair returned to its normal look.

In a recent promotional art piece released by Gainax, Scanty is revealed to be holding a chainsaw with the same black-gold color scheme of the demon sisters' weapons.[2]

Scanty is often seen wearing a rather plain beige-colored uniform which consists of a beige skirt, a beige suit jacket, heels, and a dark red tie.

She wears a rather unique black one-piece swimsuit in "If the Angels Wore Swimsuits". With it she wears two gold bracelets on each wrist and two gold anklets on each ankle. She is also seen wearing wedding garb as a disguise in "Panty + Brief" when Brief's Dad announces the engagement of the mayor's daughter, the daughter being Scanty in said disguise, to Brief. 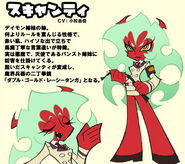 Scanty and Kneesocks watching the new form of Stocking.

Scanty holding a kind of chainsaw next to Brief, Garterbelt and Kneesocks.
Scanty's Image Gallery