Panty & Stocking with Garterbelt Wiki
Register
Don't have an account?
Sign In
Advertisement
in: Female, Angel, Main Characters,
and 8 more

"I do not understand how I can ever be related to you."

Stocking Anarchy[2] (アナーキー・ストッキング Anākī Sutokkingu, transliterated as "Anarchy Stocking") is the titular co-protagonist of Panty & Stocking with Garterbelt. Stocking is the youngest of the Anarchy sisters.[3] Her name is derived from the object she is able to weaponize.

Stocking's age is very vague. It's never mentioned canonically but we know she's over 500 years old. [4] She has pale skin and a typical "Hime Cut" hairstyle. Her hair is very long and navy on the outside while pink on the inside, and is tied with a bow (dark blue in human form, light blue in angel form). Stocking insists that everything she eats goes to her breasts, which hasn't been confirmed to be true. However, her chest is shown to be bigger than Panty's. Her eyes are cyan. She always carries a serious look on her face.

Stocking has a lolita, but not gothic outfit. Her stockings in this form are white with light blue stripes. She wears silver open-toed heels with straps, a loose white dress with a gray stripe at the bottom, and with white bows with light blue hearts on the sides. She also has a a silver corset with a white-gray bust and a light blue heart on the front. Accessories are a silver choker with white frills, silver bracelets on both arms as well as two silver bracelets on each wrist, and white one finger gloves that reach her arms.

Stocking is a levelheaded and intelligent girl, though she can be rude if provoked, especially towards her older sister, Panty,she also have a cynical,cold and sardonic demeanor.

She does not share Panty's obsession with sex. She shows interest in somewhat masochistic sexual ideas (though as sexuality is not an important part of her personality, any potential fetishes change her character very little). This is ironic since she constantly insults the demon sisters and Corset, by calling them 'BDSM loving freaks'. Instead, Stocking claims she has very special standards in men, and would rather be with someone she truly loves than simply for sex. She strings men along (not wanting them to believe she is 'easy'), and would never cheat on someone she truly loves. However, she has been shown to have a very strange and twisted vision of what attractive is, but she also seems to judge people by what's on the inside instead of out.

She hates spicy food, just as much as Panty hates sweet food,She can be mean as well with Brief . Stocking is sometimes overshadowed by Panty when in larger audiences, like in "Sex and the Daten City" and "1 Angry Ghost". She is almost always seen carrying around a plush cat, Honekoneko ("Bone Kitten"), whose expressions often match Stocking's mood. She loves Honekoneko dearly and won't let anyone touch him.

It has been shown in Les Diaboliques that while she is smarter than Panty and has more common sense, she is not very intelligent as she was easily overwhelmed by the big sophisticated words used by Scanty and Kneesocks.

To prepare for battle, Stocking removes her stockings, to which she can transform into a pair of katanas, known as Stripes I & II, which can be attached at the base of the hilt. It's safe to assume she can form other blades as well, considering the range of weaponry at Panty's disposal. Stripes I & II are able to hurt any spiritual being, such as angels, demons and ghosts.

Stocking displays a supernatural proficiency with her katanas. This includes the ability to spin the blades fast enough to effortlessly deflect bullets, the ability to send out razor-sharp slicing waves by swinging her weapons, and the ability to spin like a top with her swords extended to damage everyone around her. It has been stated by Garterbelt that, contrarily to her sister, she emphasizes skill over power.

Mysteriously, her plushie Honekoneko has once been seen breathing fire.

In "Ghost: The Phantom of Daten City", Stocking, while helping Panty find new men to sleep with, saw the ghost hitting on a few girls, and immediately went to talk to him. He was rude to her, stank, and was generally a very unpleasant person. However, Stocking fell completely in love with him, and even told Panty that she felt like she had been born for the sole purpose of meeting him. That afternoon, Stocking prepared several sandwiches to him. He told Stocking that they tasted like crap though, but Stocking didn't seem to care, accepting and even liking most of his flaws.

They dated many times after that; going to a theme park and skating. Several media started criticizing Stocking for dating a ghost, and Panty, after reading a headline about her sister and her ghost boyfriend, finally decided to talk to Stocking. However, Stocking didn't listen to her, but her insecurities of being an angel finally arose. That night, she confessed to him she was an angel, and that one of her duties was to dispose of ghosts. She also told him she was willing to forsake her duties as an angel, in order to be with him. Stocking then decided to leave the church.

After seeing her sister leave, Panty tried killing the ghost off, but Stocking stopped her, telling her she couldn't understand her feelings, for she had never fallen in love before. Panty told Stocking that the ghost didn't love her back, but the ghost told her she was mistaken, and proceeded to propose to Stocking with a ring. However, before Stocking could accept, the ghost started glowing, and eventually dissappeared. Garterbelt explained the ghost had been purified, for falling in love with Stocking. .

The song "CHOCOLAT", sung by Mariya Ise, is meant to represent their relationship.

Throughout the series, Stocking either eats or mentions wanting to eat a variety of sweets, including: 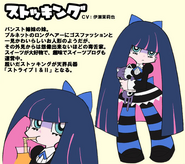 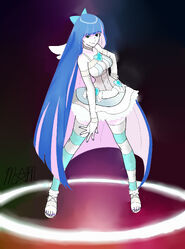 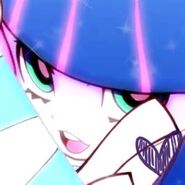 Stocking transforms her stocking that she took off

Stocking saying she is "actually a demon" 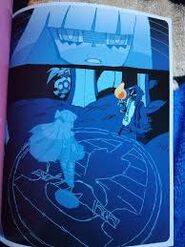 Stocking's form in the Season 2 doujin 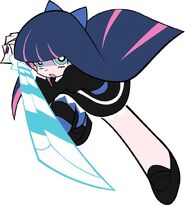 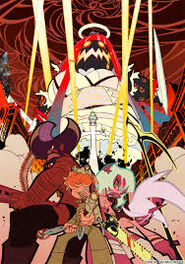 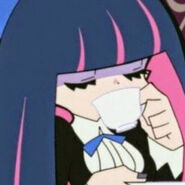 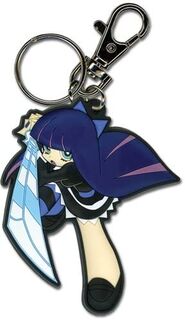